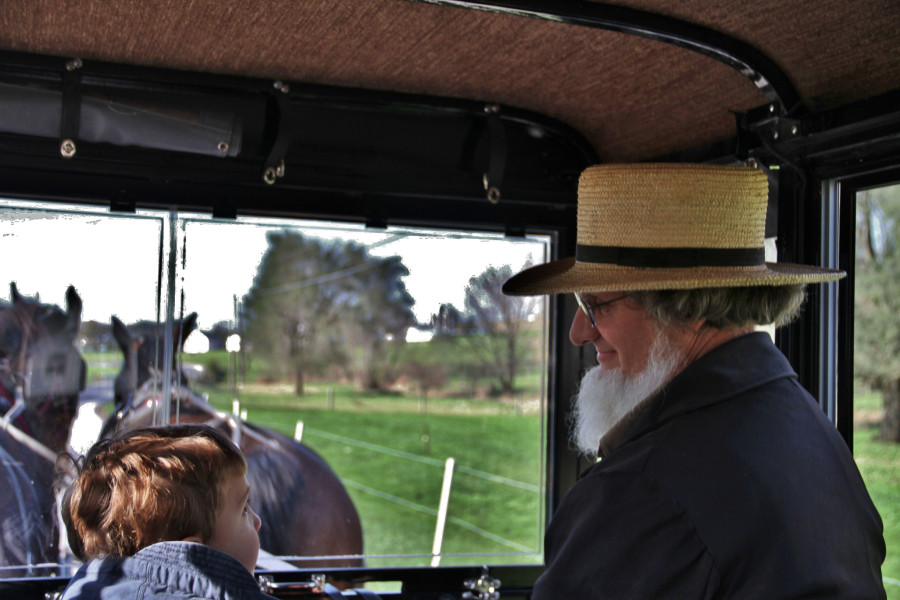 What can I say about Amish land? Best explained as an entirely different world. This photo of my five year old nephew and our Amish buggy driver, Ben, is symbolic of the differences between the Amish and most Americans. At five years old, my nephew has had an Apple device in his hand since he was a toddler. He's curious about the world and already knows a lot of facts about different countries. And then there's Ben, about sixty years old, who has lived in the Amish community his whole life, never played with an iPad and will never travel outside the United States, or even to a far away state. Completely different lives and destinies, but both smiling and happy.

The first American Amish settlements began in Pennsylvania in the 1730s. By the mid 1800s, Amish settlements were spread across the country. Today the largest Amish populations are located in Pennsylvania, Ohio and Indiana. There are about 25 different Amish affiliations in America, further divided into approximately 1,700 church districts. The Amish are community based, and each district makes its own decisions as to what is allowed for its members. We visited the community in Lancaster, Pennsylvania, which is about three hours from DC.

The Amish are sometimes perceived as being cult like but this is not the case. They are Christians and their basic beliefs are Biblical. However, they are distinguishable from other religious groups because of the way they implement their ideology. The core principle of Amish faith is that Christians are to be "in" the world but not "of the world." What does this mean? In general, Amish people separate themselves from all things in the outside world which could distract from their faith and sense of community. This typically includes restricting access to electricity, automobiles, modern clothing, television and technology.

1.  The first thing you notice when you enter Amish land is the horse and buggy, the main mode of transport for Amish people. It's quite fascinating to be awakened by the sound of horse hooves in the early morning and you can hear the buggies coming from a distance at all times of day. The cost of the buggies varies based on the interior, etc. but the typical price range is $5000 - $8000 (not including the price of the horse). Our driver informed us that most of the buggy horses are rejects from local race tracks. Buggy styles vary by community but in Lancaster they all pretty much look the same, with the dark gray cabin and the driver barely visible though the small windows of the buggy. At all local stores there are spots where the horses can be tied and buggies parked. 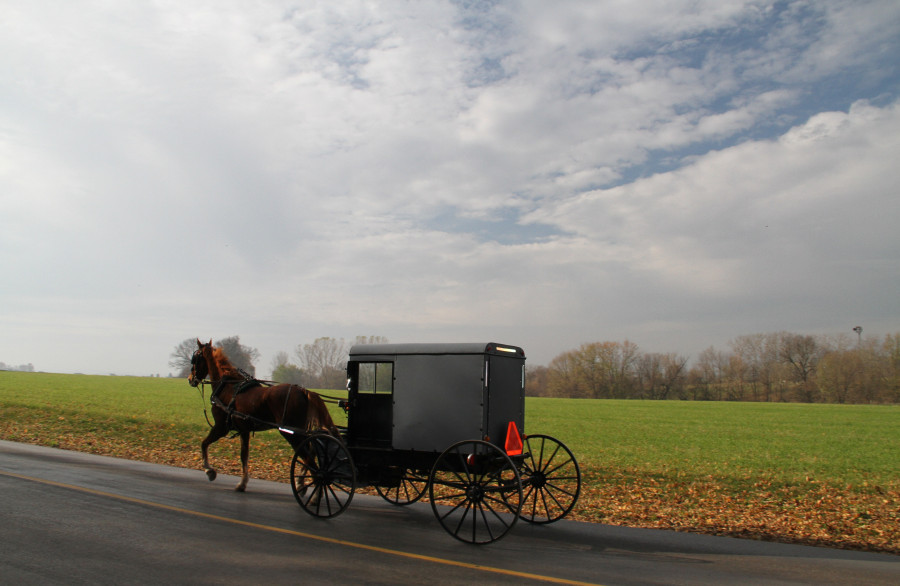 2.  The buggies are required to have turn signals and large triangular reflectors so they are visible on the pitch black roads at night. Our innkeepers informed us teenage Amish drivers pimp out their rides with more decorative lights but I didn't see any examples of this. There are no age restrictions or required skills tests for operating the buggies so children also drive them. You may notice the lack of license plates on the buggies. Indiana is the only state that requires the buggies to carry plates. I've read that some Amish would prefer a license plate requirement so it's easier for law enforcement to inform family members in the event of an accident, emergency or death. By the way, I didn't see one cop car or policeman during the visit. 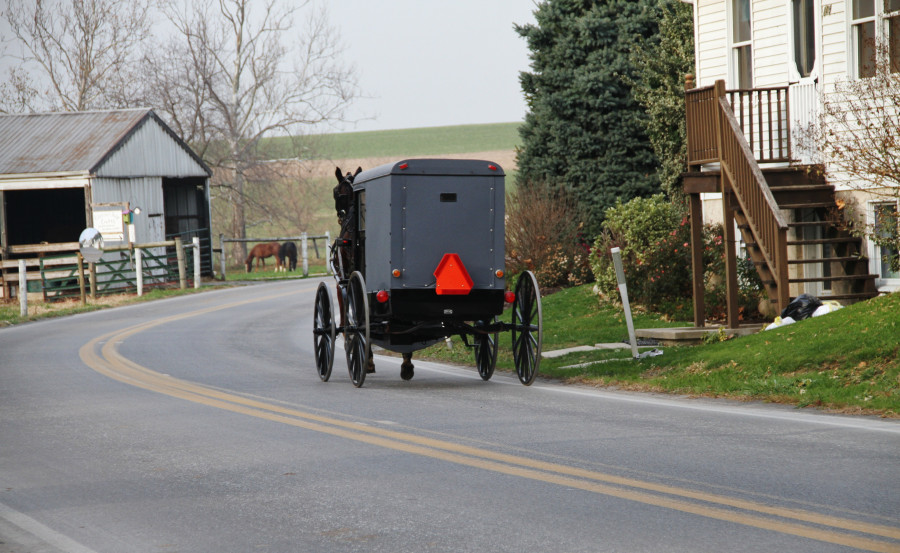 macos you have a buggy plate in your collection? :) 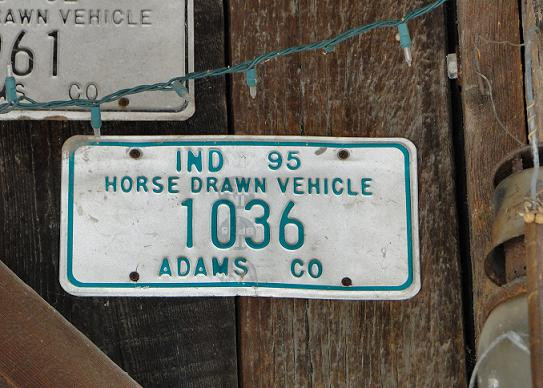 4.  Some Amish communities allow bicycles and scooters. In Lancaster, Amish people can ride on bicycles but you will see in the below photo that they contain no chains or pedals. So the riders must use their legs and feet to scoot along. Sill faster than walking but another example of the ultra conservatism of the Lancaster district. With pedals it's easier to go further distances and thus a greater chance children, teenagers, etc. will be exposed and tempted by the outside ways of the world. I should also take a second to say that you can only photograph Amish people from a distance or behind. They consider it a sin (a sign of vanity) to appear in photos and it's generally frowned upon.

The Amish do not own cars, but they are permitted to ride in cars driven by others. Our innkeepers picked up local school teachers every afternoon and returned them to their homes and farms. In the markets and stores you will see Amish people carrying groceries to cars driven by an "English" person. All non-Amish people are referred to as "English" by the community. 5.  Amish communities are always located in very rural areas and Lancaster is no exception. Everywhere there is farmland and you will see residents plowing their fields. Traditionally farming was the main occupation of the Amish, but this has shifted in the past few decades and many have taken on other jobs. Most Amish are educated only to the 8th grade so they typically work in labor intensive or manufacturing jobs. A whole separate post could be written on the Amish education system because it's completely different than the standard American school system. I'll try to write about it at some point. But it fits with the Amish way of life. The more educated someone becomes, the more curious they become about worldly things and places and this is strongly discouraged in the community. Sad to me. 6.  Women in the community are interesting. They are engaged in hard labor. Here a young lady prepares to mow the grass old school style, without reliance on a motorized machine. Hard work! The women dress very plain, wearing neutral-colored, ankle-length dresses and head dresses. Straight pins are used instead of buttons because buttons are considered too "flashy." No make-up or jewelry is permitted and hair is typically long, wrapped up in a bun. Men also dress in the same manner, with dark trousers, suspenders and hats. Married men have beards, single men shaven. Again, the uniform appearance in the community is in line with the Amish belief system. By limiting clothing choices, they save time and energy which can be dedicated to prayer, family and community. More importantly, dressing alike prevents individuality, pride and any sense of vanity. 7.  I mentioned earlier that the Amish do not rely on technology. There is an exception when it comes to technology which enhances, or is essential to, work productivity. Each district leader considers and approves which technologies will be allowed in the relevant community. However, today almost all farms use mechanical milkers and cooling tanks. Milk production is huge in Amish communities and everywhere there are cows. You will immediately know when you've entered Amish land because it smells like manure!

The aversion to technology pertains only to technologies that support reliance on, or exposure to, the outside world. Because the Amish do not want to be dependent on the outside world, they do not have electricity in their homes. Instead, they use lanterns and  lamps powered by kerosene and propane. Similarly, stoves are powered by kerosene, propane or wood. Plumbing is powered by wind, water, compressed air or gravity. 8.  Everywhere there is beautiful farmland. 10.  Roads here are very narrow and curvy. Without street lights it's almost impossible to navigate in this area at night without GPS. You simply cannot see the street signs or minimal markings in the black night. 11.  Lots of natural streams in the area. 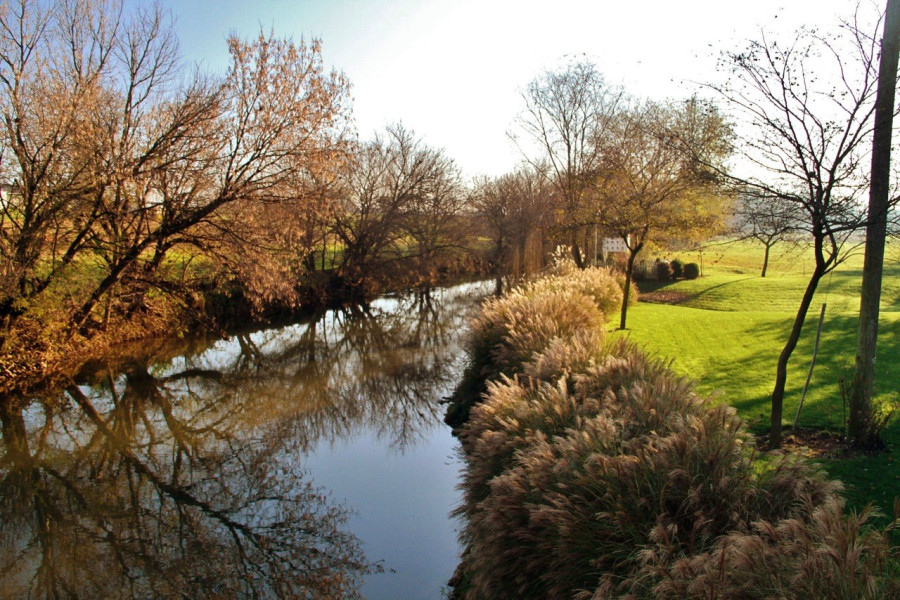 12.  Many farms have nice little bridges on the property, inaccessible to others. This area was protected by a fence. Most Amish in this area live on farms but some live in more modern looking houses. 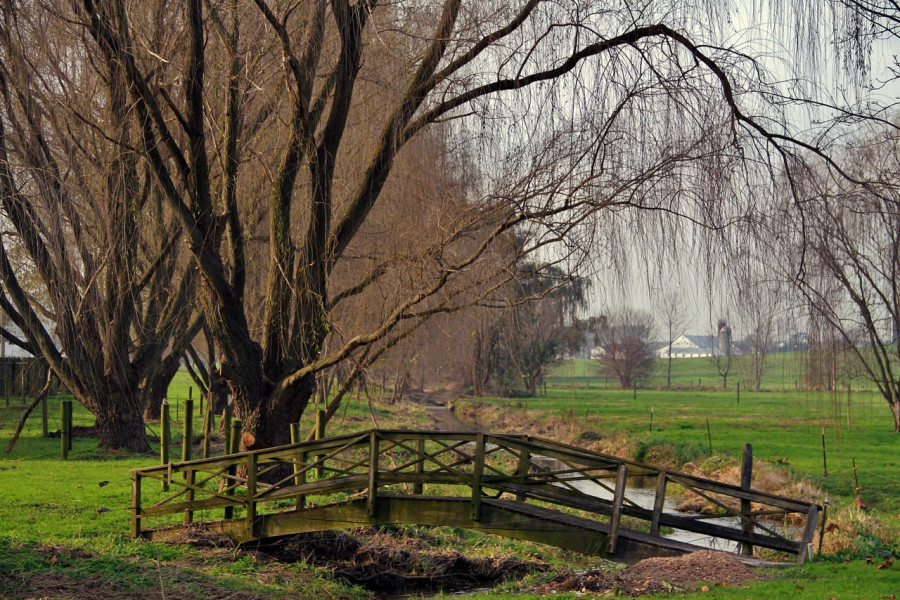 13.  Lancaster County also is home to many historical covered bridges. Below, Herr's Mill Bridge. You can drive over a few of them but not this one. 14.  Here's a young girl on a farm by the Herr's Mill Bridge. She was sad, yelling for her dog that had escaped from the leash. The dog was actually standing right beside me when I photographed the little girl from a distance.

In the end, I have very mixed emotions about the Amish. Of course I respect their strong sense of community and family values but it makes me very sad to know that if this beautiful young girl stays in the Amish community she will never see other parts of the world or be exposed to different viewpoints and ways of thinking. I could never survive in a community where individuality is discouraged or where exploration or thinking for one's self is frowned upon. To me individuality is to be celebrated. It's what makes the world so interesting. And to me exploration, be it through travel or simply reading about other places or belief systems, is the essence of life. 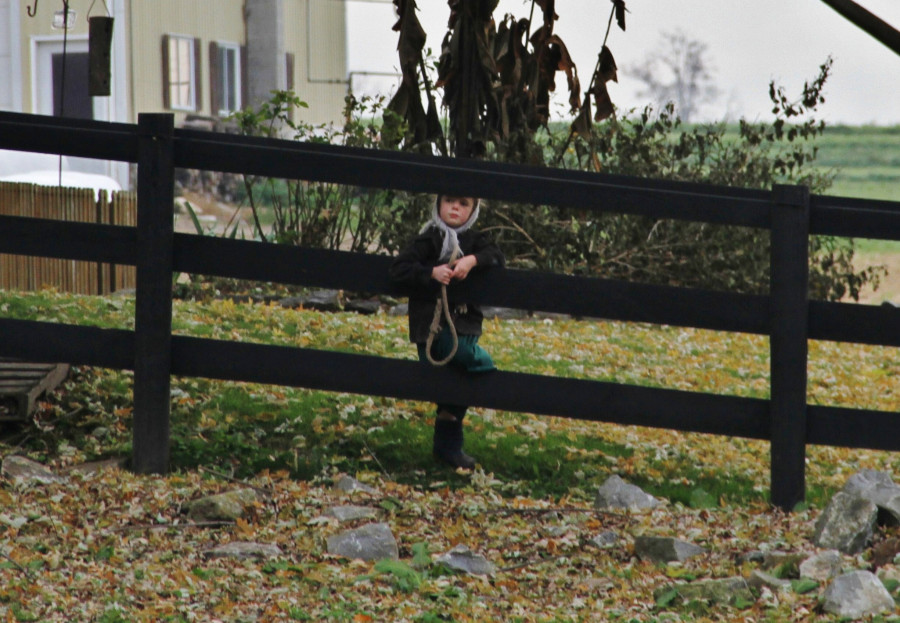 I hope you enjoyed reading about the Amish. There's so much more I could say but this post is already too long. Any questions? Feel free to write and I'll try to answer. I've read a lot about the community the past few months.